Anyone who knows me knows how much I like Springsteen, especially his output from the early 1970s to the mid-1980s. Born to Run, The River, and Darkness on the Edge of Town especially are records that I still spin frequently. The characters that populate those songs remind of my hometown of Scranton, PA, or any other city that has fallen on hard times and is a gutted husk of its industrial past. With that said, I have to address the new film Blinded by the Light, which focuses heavily on those albums and draws off of Sarfraz Manzoor’s memoir, Greetings from Bury Park. I will admit there are several cheesy scenes in the film, but it’s an earnest attempt to highlight the universality of Springsteen’s music and his conflicting depictions of the American dream.

Set in 1987, Blinded by the Light is the story of a young Pakistani writer Javed (Viveik Kaira), whose conservative father, Malik (Kulvinder Ghir), moved his family to the hardscrabble town of Luton, England to make a better life for his family. Initially, the plan works, until Malik looses his job after the factory closes down. As a result, his wife, Noor (Meera Ganatra), spends hours slaving away over her sewing machine to fulfill extra orders for neighbors as a means to support the family. The children are also forced to find odd jobs so the family can stay afloat. This economic struggle is reinforced several times when tracks like “Promised Land” play throughout the narrative, echoing the family’s woes and Javed’s frustration because he wants to be a writer, despite his father’s insistence that he become a lawyer or doctor. Their relationship is one of the driving conflicts throughout the film, and it’s exacerbated by the family’s economic woes. Springsteen is the only thing that makes any sense to Javed, and when his friend Roops (Aaron Phagura) introduces him to the Boss, his life changes. He realizes that he wants to be a writer, and he understands that his family’s economic strain at the height of Margaret Thatcher’s rule is not limited to England. The film draws overt parallels between Thatcher’s England and Reagan’s America, underscoring how working-class people were left behind as unions were busted and factories shut down, despite the fact both leaders initially appealed to the white working-class. Sound familiar?

The father/son conflict draws on Springsteen’s own life. Time and time again, including while introducing a song live, the Boss has talked about his hardworking, conservative dad and the clashes they had when he was a teen. His dad didn’t want him to play rock n roll and wanted him to go to college to make a good living.

There is a duality that exists within the film that reflects Springsteen’s music. On the one hand, Javed is attracted to the romanticism of Born to Run- era Springsteen, especially a track like “Thunder Road” about getting out of your hometown and chasing something bigger, the American dream, so to speak, with a lover. In one of the cheesiest scenes, Javed sings the song on the street to his love interest, Eliza (Nell Williams), an activist who spends her days handing out petitions and flyers to free Nelson Mandela, while wearing a pin-plastered black leather jacket and namedropping The Smiths.

Yet, as the film progresses, and as Javed’s dream, as well as his father’s dream, become more and more difficult, the music shifts to The Darkness on the Edge of Town-era Springsteen, an album that is lyrically quite a contrast to Born to Run. The lyrics show what happens when dreams are dashed, when the characters on Born to Run run out of gas, essentially. This is the recession-era Springsteen, set in 1980,  on the cusp of Reaganism and the explosion of economic inequality, trickle down economics. Other tracks highlighted in the film, like “The River,” about a young couple who marry early and essentially have no future in their dead-end town, also reflect the struggles of the people in Luton whose jobs were outsourced.

Lastly, the film doesn’t whitewash the story line. The immigrant experience is another central arc. The Pakistanis like Javed’s family that moved to England for a better life are terrorized by neo-Nazis and the National Front. Javed is harassed and chased several times by young skinheads. His family is later assaulted during a white power rally, and in one of the most alarming scenes, children pee in the mail slot of a friend/neighbor and repeat, “Stinky Pakis.” This story line is powerful and done just right, without being preachy. It shows the darkness that existed in Thatcher’s England when neo-Nazis marched in public.

Yet, despite all of this, Javed works hard at becoming a writer, and he’s still drawn to the promise of Springsteen’s music, the idea of chasing a runaway American dream, the idea that anything is possible. That romanticism, even to this day, still exists in the Boss’ music. He’s always encouraged an all inclusive America, one that celebrates the immigrant experience and praises the hands that built this country. At the same time, he’s always acknowledged economic exploitation and the consequences of trickle down economics. Blinded by the Light gets both sides of Springsteen right. Though cheesy at times, it’s an incredibly uplifting film. It probably won’t win any Oscars, but it’s very much a movie we need right now.

Throughout Springsteen’s career, he’s always done a good job of documenting the times we live in. Darkness on the Edge of Town features gritty working-class characters in over their heads and trying to survive. Born in the U.S.A. also tackles blue-collar issues, especially Ronald Reagan’s trickle down economics and what it did to our country in terms of increasing economic disparity. Then, in the 1990s, Springsteen released the quiet acoustic album The Ghost of Tom Joad with a lot of songs from the immigrant’s point of view. On his latest album, Wrecking Ball, out this week, Springsteen addresses these issues again and the financial crash and economic meltdown that put a lot of people out of work. This album, in my opinion, is one of Springsteen’s best. It is big and epic, topical and direct.  Springsteen manages to contrast reality with the promises of the American dream and point out the stark differences.

Musically, Wrecking Ball is one of Springsteen’s most diverse albums, a criss-cross of genres, folk, gospel, rock, and even some hip-hop. “Shackled and Drawn” sounds like an old chain gang song. It also has some of his most poignant working-class lyrics. He sings, “Gambling man rolls the dice/workingman pays the bill/It’s still fat and easy up on banker’s hill/up on banker’s hill, the party’s going strong/down here below we’re shackled and drawn.” Has there been a song, poem, or novel in the last few years that so clearly highlights the economic inequality that has skyrocketed in this country?

Some of the tracks feel like sequels to some of his earlier work. “Death to My Hometown” could be seen as a follow-up to “My Hometown” from Born in the U.S.A. In the new track, there’s nothing left in the hometown. Springsteen sings, “They destroyed our families, factories/and they took our homes/They left our bones on the plains/The vultures picked the bones.” What a rustbelt anthem and truth!

However, the tracks on Wrecking Ball differ from some of Springsteen’s other working-class narratives in the sense that the working-class is starting to rise up and fight back. On “Death to My Hometown,” he sings, “Be ready when they come/for they’ll be returning/sure as the rising sun.”  Springsteen wrote a lot of the songs before the Occupy movement really took off, but he obviously realized enough was enough and America needs a social movement again to challenge power.

The album’s title track is also punctuated with some optimism in the simple refrain, “Hard times come and hard times go.” That seems to be a reoccurring theme on the album. A lot of the tracks state that America has always had periods of economic divide and great uncertainty, so it’s important for people to take care of each other through difficult times, and somehow, we’ll survive.

Wrecking Ball accurately depicts the times we live in, the great economic divides and  inequality, and while the album may feature some of the angriest lyrics the Boss has ever penned, it is clear he believes we will get through this if we take care of each other. Hard times come and hard times go. 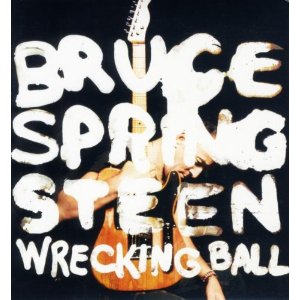