This is the first time in a long time I’ve agreed with Time Magazine’s decision for its annual Person of the Year story/cover. This year, the magazine has chosen “the protestor” as its 2011 Person of the Year. 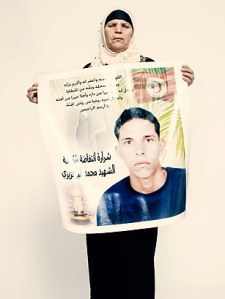 The article regarding the magazine’s decision can be read here, and it gives a comprehensive overview of the year of protest in the Arab world, the U.S., and mostly recently Russia. As the magazine points out, the year of protest was ignited on Dec. 17, 2010 when Mohamed Bouazizi, a street vendor in Tunisia, was hassled by police. He walked to the capital building to complain and got no response. So, he drenched himself in paint thinner and lit a match that ignited the Arab Spring. His action came after the country’s dictator continued power grabbing moves and a high cost of living.

The focus of the Arab Spring, though, mostly happened in Egypt, where, after months of protests and complaints about a fraudulent 2010 national election, thousands of young activists were able to topple a dictator, Hosni Mubarak. Since then, the military has taken power, and lately, Tahir Square has been flooded with protestors again, as the country’s citizens complain that the military is refusing to give up power.

Meanwhile, while the Arab spring was forming, thousands flooded the capitals of rust belt states, including Ohio and Wisconsin, especially Wisconsin, to protest restrictions on unions, especially the right for public employees to collectively bargain. Despite the massive protests, the governors in Ohio and Wisconsin still signed anti-union bills. However, in Ohio, citizens voted overwhelmingly in November to restore the union rights. And WI Gov. Scott Walker is likely to face a recall election. The move to collect enough signatures to get him on the ballot is now underway, and activists in that state are already close to getting enough signatures.

All of this preceded the largest protest movement the U.S. has seen in decades- Occupy Wall Street. What started as a dozen or so kids coming to Zuccotti Park on Sept. 17 has now blossomed into a national movement. Across the country during the fall, tents sprang up in nearly every major U.S. city. Since then, the police have shut down most of the tent cities, but the marches and protests continue.

2012 will reveal what’s next for OWS. This Sunday in NYC, the organizers are meeting to discuss where the movement goes from here. But OWS has been mighty successful in the sense it has totally changed the national conversation. Now everyone is talking about the fact the U.S. has the highest rate of economic inequality since the 1920s. President Obama has pivoted towards a more populist tone, and last week, during a speech in Kansas, he said this is a “make or break moment for the middle class.” He has co-opted some of the language of the OWS movement, and the movement has given him the space to be able to address much needed economic reforms and regulation of Wall Street.

OWS dominated the news in the last few months of 2011. The image of students getting pepper sprayed in the face at UC Berkley was all over the news, as well as images of standoffs between the NYPD and protestors in Zuccotti Park and thousands marching across the Brooklyn Bridge and also circling the New York Stock Exchange, nearly shutting it down.

I’ve worked with several OWS activists in the Scranton area, and I’ve visited sites in Philly and Boston. I’ve had my disputes with some activists over the use of tactics, and I would like to see the movement grow into real legislative reforms and people running for office, but while involved, I felt like something really profound is happening in this country and in the world. People have finally had enough, and for the first time in decades, they are finally protesting and getting involved in politics. It’s so inspiring to see young people across the globe speaking out.

Kudos to Time Magazine for acknowledging that 2011 was a year of mass protest, and since it is more than likely 2012 will feature more economic uncertainty and continued assaults on the middle class, the protests will continue.