As a break from blogging about poetry, I wanted to write about something different, and share my enthuasiasm for the upcoming X-men: Days of Future Past movie, directed by Bryan Singer, who directed the first two X-men films. There are a number of reasons to be excited about this film if you have any interest in the X-men or comic book movies in general. For one, Bryan Singer directed it. As a long-time fan of the X-men comic franchise, I’ve always felt that Singer got it right with the first two X-men movies, especially the feel of the comics and the theme of the X-men being outsiders. The comic started in the early 1960s, during the civil rights movement, and the mutant/outsider trope worked well as a metaphor for civil rights and later on gay rights. Singer did a great job capturing that aspect in the first two films and showing the divide between mutants and some of the more small-minded humans.

Furthermore, perhaps no story better sums up the mutant as outsiders trope better than the two-part story line of Days of Future Past, issues 141 and 142 of Uncanny X-men, which you can read for free here. The war between humans and the mutant outcasts escalates to the point that humans create a line of robots, the sentinels, to hunt down and kill all mutants, which, in the dystopian future, they succeed at doing. There was something so horrifying and menacing about the sentinels in the comic, especially since they eventually turn on humans and not even the X-men can stop them. As a little kid, I had nightmares about these robots stalking my neighborhood. This arc too represents the line between militancy and peaceful activism, mutants that do not want to co-exist with humans and mutants that believe peace is possible, essentially. 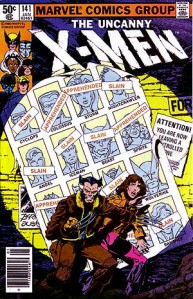 Finally, some clips in the trailer have me excited as an X-men fanboy, including Iceman’s ice slide, Magneto ripping apart a sports stadium, Colossus going toe-to-toe with the sentinels, and seeing the origional cast from the first two films reunited. It’s evident some of the material from the comics is changed. For instance, Wolverine is the one going back in time in the film instead of Kitty Pyrde to try to prevent the dystopian future, but it should be a good summer blockbuster anyways. Other than The Walking Dead, the X-men franchise has been the only comic book/comic movie series I’ve cared about. It’s always been about more than action, and Days of Future Past is comic book writing as its best, a combinition of action, strong story, and a great political and social undertone. This movie should show too how the X-men comics have always interwoven U.S. history with the comic story.