If you asked me to make a list of my favorite horror films of the 21st Century, I would certainly include Pascal Laugier’s Martyrs (2008) on that list, one of the most unrelenting and memorable films of the French Extremity wave that dominated the first decade of the 2000s. Needless to say, I was eager to see Laugier’s latest entry in the horror genre, this year’s Incident in a Ghostland. Like Martyrs, the film deals with trauma and toys with the conventions of the genre, specifically home invasion, but unlike Laugier’s previous film, Incident in a Ghostland’s major flaw is poor character development, especially regarding its villains.

The plot of Incident in Ghostland is basic. A mother, Pauline (Mylène Farmer), moves her daughters, Beth (Emilia Jones) and Vera (Taylor Hickson), into a deceased aunt’s house. Before they finish unpacking, the family is terrorized by the Candy Truck Woman (Kevin Power) and the “Fat Man” (Rob Archer). The villains are the most problematic part of the film. Their motivation is totally absent. The Candy Truck Woman, a trans character, is a shadowy figure who is presented as threatening, but it’s unclear what motivates this character to brutalize the family and dress the girls up like dolls for the ogre to fondle.  Personally, I have no issue with creating a trans character who is a slasher, as long as the motivation is clear. The Silence of the Lamb’s Buffalo Bill is a trans character, but there is a speech in the film and novel by Hannibal Lector that makes clear Buffalo Bill does not murder or kidnap based on that, but rather, has other motives. Buffalo Bill was also based on Ed Gein. Here, it is unclear if the Candy Truck woman is menacing because of sexuality/fear of “the other.” The character is given no backstory and is usually only on screen when committing violence. 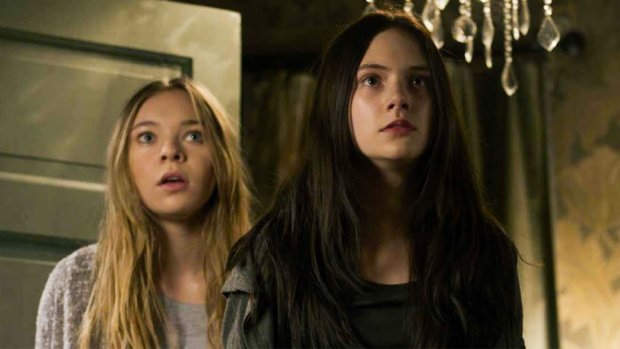 Despite the problematic character development of the villains, the film is not without its strengths. The aunt’s house, filled with wide-eyed, creepy dolls and dusty antiques, creates a moody atmosphere. This is a house that lives and breathes, that has laughing dolls with glowing eyes in its closets. Vera, an aspiring horror writer obsessed with Lovecraft, loves it, while Beth, forced to leave her school and boyfriend behind, scoffs at the cobwebbed rooms.  The themes explored and narrative choices are worth mentioning, too. Like Martyrs, the film addresses the effects of trauma and bends reality. Vera can’t cope with what happened to her family, and as a result, she creates a separate reality for herself, one in which she’s an adult and an accomplished horror writer. This alternate reality creates some interesting narrative choices that upend the conventions of the slasher and home invasion sub-genres. Vera and Beth are tough gals worth rooting for, and they fight and endure, despite the utter cruelty they suffer. In terms of the gore level, a staple of French Extremity films, Incident in Ghostland feels restrained at times compared to Martyrs or other staples of that period, but the film is not always the easiest to watch, especially when the young women are groped by the Fat Man.

Incident in a Ghostland had a lot of potential. It has memorable actresses and establishes the right tone, atmosphere, and tension. However, its under-cooked villains are a glaring flaw, difficult to ignore.