I’ve been saying for years that northeastern, Pennsylvania has a vibrant art community and literary scene. Those scenes have just become stronger thanks to the re-launch of the literary magazine Word Fountain, which makes its return to the world this Friday, via a launch party.Check out the Facebook event page here. The reading will be from 7-8 p.m. at the Osterhout Library in Wilkes-Barre.

As a preview, here is an image of the new cover!

A few months ago, I shared news on this blog that [PANK] was shutting down, after its editors, M. Bartley Seigel and Roxane Gay, announced the news about the cutting-edge mag via social media. The announcement sent ripples through the literary world. New York Times Magazine called PANK “a raft of experimental fiction and poetry.” Travis Kurowski, editor of Story Magazine and columnist for Poets & Writers, said, “Like McSweeney’s was nearly 20 years ago (and The Paris Review 40 years before that), PANK has been one of those lit mags that seemed to represent the zeitgeist of a generation—a literary turn towards diversity, queerness, raw authenticity.”

These quotes come from the introduction to an interview Electric Lit just published with outgoing editor M. Bartley Seigel, and the interview contains some huge news about the fate of the magazine. It’s going to live on! It has been purchased by John Gosslee of Fjords Review.

The interview features a lot of other interesting tidbits. For instance, Seigel states that he and Roxane Gay decided to step away from the magazine because they are in their mid-40s now and have too many projects happening.

Here is what he said about his time editing [PANK] and the state of American literature:

Overall, I ended my tenure at PANK in a very, positive place. American literature is robust, vibrant, and very much kicking and screaming. Reading and editing and publishing PANK only drove home for me that the foundational world of American letters, underpinning the big publishing houses, the major awards, the world of literary magazine and small and independent presses, is wide and deep and teeming with the most amazing publishers, editors, writers, writing, and readers. If I have a critique of American letters, it’s that the average American doesn’t read broadly enough, not enough work in translation, that we’re too isolated, too narrow in our reading habits, still too locked into boxes like the one built out of white male heteronormativity.

I encourage anyone to read the full interview. It provides a lot of insight into the contemporary literary landscape and the future of one of America’s most important lit mags.

Last night, the editors/founds of [PANK] shared some sad news. The magazine will close at the end of the year. Here is the official statement shared on social media:

Please accept this brief note as PANK’s formal notification of resignation, effective as of the end of this calendar year, 2015. We’ll publish one last print issue and two final online issues of PANK Magazine; look for those in the months ahead. We are immeasurably proud of our publications and have boundless gratitude for all the staff, contributors, and each and every reader who has labored alongside us over the last decade. It’s been an immensely gratifying ride. PANK loves you.

Over the last several years, [PANK] has been one of the edgier and influential literary journals in the country, whose following grew from year to year. It should also be noted that when the magazine started, Roxane Gay did her best to feature several female voices, which is important to note, since the literary world is still very much dominated by men, even in 2015.

I’ve had the pleasure of writing book reviews for [PANK] over the last five years or so, and I’ll always be grateful for that opportunity, and for the reviews that they did of my first two poetry collections. RIP, [PANK]. Oh, and before any assumptions are made regarding funding cuts or someone dying, here is what Seigel said in response to the comments on Facebook:

This outpouring of support is humbling. Thank you. But three points: 1. No one died, no one yanked our funding, there’s no scandal, we just decided we were ready to move on to other things. 2. Who knows, maybe PANK will be back one day, new, better. 3. Translate some of this energy into going out and supporting the wonderful litmags that are still at it and will still be at it when PANK closes its doors. -M. Bartley Seigel

Let’s hope that the magazine does return even new and improved. In the meantime, go read it!

Two Cities Review will be publishing its fall issue in the coming days. I’m thrilled that my poem, “Stargazing,” will be included. The editors launched a preview of the fall issue, which you can read here. It features my poem, and check their website in a few days for access to the rest of the issue.

I wanted to share two new reviews of my poetry collection, All That Remains. The first review was published in the Maine-based journal Off the Cost. Initially, the review was published in print only, but the editors recently uploaded content online. The reviewer, Richard Aston, says of the collection: “All That Remains works as a maturing of Fanelli’s previously published chapbook Front Man. Now he is in a position to branch out to the larger community beyond his personal experience, both in terms of personal story and time line; that which follows from the kind of study and scholarly research that will make him an excellent teacher and writer. The future may bring modifications in form, both of the line and the work itself. Whether the future form he uses is formalist or experimentimental, a doff to poetic traditions of rhyme and meter is in order.”

The other review was published by [PANK] today and written by Tricia Fidler, who had a lot of kind words to say about the book. She writes: “Like a Dylan or Springsteen record deserves more than one spin, Brian Fanelli’s All That Remains is a book that deserves more than one read. Rich in small town culture, this collection is filled with characters that have overcome the losses in life, but it doesn’t forget those who have not. It is down-to-earth and true to those often overlooked groups, the young idealists and the rural working class. Fanelli’s lyrical rhythms whisper and howl, croon and screech, reminding us there will be repercussions for every loss. At the same time, the collection leaves us with the extraordinary hope that it seems only music can bring. For whenever the music stops and all that remains are the ghostly echoes of silence, there will always be the remnants of a song.”

Many thanks to the writers for these reviews, and if you haven’t had a chance to pick up a copy of the book, please do. I’d appreciate the support. Let me know what you think of it!

The process of submitting your writing to literary journals can be utterly daunting. One of the most popular databases, Duotrope, now charges a fee for its services, and unless you know what you’re looking for, it won’t yield much for a basic search. Another well-known resource, Poets & Writers magazine, has a classifieds section available online and in the back of the magazine. Some of my publishing credits came from resources I found in that classifieds section. However, that section can be hit or miss, and lately, it features more ads for conferences and grants than it does for literary magazines.

Recently, I started submitting new work to various magazines, and I’ve discovered two wonderful resources. One of the resources is called The Review Review, a website which publishes reviews of various magazines, thus providing information to writers about what the mags are looking for and the type of creative work they typically publish. Furthermore, the website includes a database of literary journals, and I’ve been mining the database every few days for new publishing opportunities. Check out the site and bookmark it. New reviews are published frequently, and new magazines are added to the database.

I also discovered a website created by Jeffrey Bahr, a poet whose work has been published in some of the most prestigious literary journals in the country, such as Iowa Review, Indiana Review, and Black Warrior Review. Basically, Bahr has a list of lit. mags on his website and provides short blurbs about their submission process. He rates them  in terms of difficulty, and Poetry magazine and The New Yorker top the list.  Keep in mind that just about every single publication on his list is fairly well-known, and even the journals at the bottom of the list, such as Main Street Rag, Tar River Poetry Review, and Spillway, have low acceptance rates. (Both Main Street Rag and Spillway rejected my work multiple times before I finally got an acceptance recently in each of those mags). But the list is worth checking out, especially for mid-level writers looking to break into some of the more well-known magazines.

I’m entering the summer on a positive note, with a few poems forthcoming in solid literary magazines. First, I want to mention that my poem “R.F. Post” appears in the most recent issue of the UK-based art/literature magazine Popshot. This magazine is available at most Barnes ‘n Noble stores and online. What’s especially interesting about this journal is the way the editors combine art, fiction, and poetry. Each issue has a special theme, and the editors invite artists to illustrate some of the written work. Here is a picture of my poem and the accompanying illustration from the most recent issue, with the special theme of “imagination.” 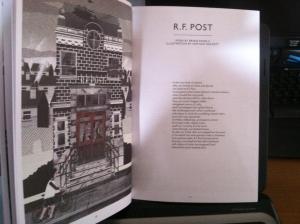 The journal’s website has a PDF of some of the content from the new issue. You can check that out by clicking here. However, I encourage you to purchase a copy through the journal’s website or at your local Barnes ‘n Noble because it is a really cool magazine, one which blends different art forms.

Later this summer, my poem “Temp Worker” will be published in The Oklahoma Review, and I have poems forthcoming soon in Poetry Quarterly and Spillway. I’m also currently working on an essay for Poets’ Quarterly about T.S. Eliot and William Carlos Williams, specifically the influence of Ezra Pound and Imagism on their work. The essay comes out of a longer paper I did for one of my Ph.D. classes this semester. In other news, I’ll be doing a few weekend readings over the summer,  specifically in June and July. I will post more details about the readings here when the dates are finalized.