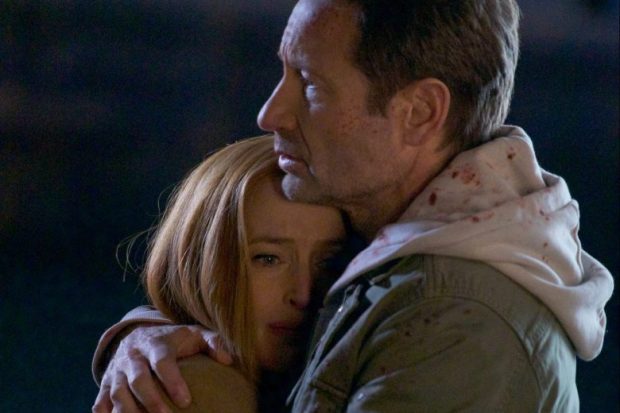 Last week, FOX premiered what may be the finale of the “X-Files,” a one-hour episode entitled “My Struggle IV.” If last week’s episode is indeed the swan song for the show, I’m okay with that. Gillian Anderson  insists that she is done with the show.

The episode, written and directed by Chris Carter, focused on the ongoing alien mythology arc, specifically Scully and Mulder’s attempts to track down their son, William, and prevent an alien virus from wiping out humanity. William, it seems, is the key, hence why Mulder and Scully’s longtime foe the Cigarette Smoking Man (William B. Davis) has been tracking him for years.

I give the episode a B/B-. On the plus side, Mulder has a touching scene with William when he finds him on the run from Syndicate thugs. William showcases his awesome powers, including the ability to make heads explode. However, the episode doesn’t make clear if Skinner (Mitch Pileggi) is dead after getting mauled down by a car. William, meanwhile, re-emerges from the river in the final scene after the Cigarette Smoking Man thought that he killed him. If William is still alive, then what does that mean for the alien virus?

The story concludes when both Scully and Mulder find out he’s not really their son, but instead some lab experiment and an alien/human hybrid creature. Instead, we learn that Scully is pregnant by Mulder, so, at long last they can be together and raise their own child. The Cigarette Smoking Man’s story comes to a conclusion, too, after Mulder pumps his chest with a round of bullets and he falls into a river. 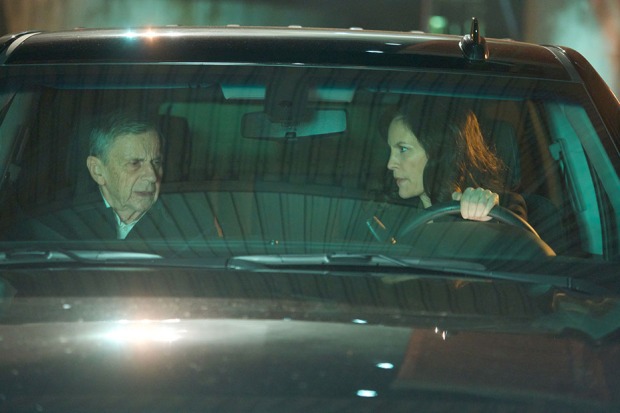 “My Struggle IV” is not as satisfying of a finale as season 9’s two-parter entitled “The Truth,” which featured the return of David Duchovny, who was MIA for the previous two seasons. “The Truth” also featured several “X-files” fan favorites who made one more appearance, and it concluded with Mulder and Scully on the run, but ready to face whatever may come next. That said, “My Struggle IV” does provide a decent ending point. Mulder and Scully can be together.  The Cigarette Smoking Man is dead, though, to be fair, he was torpedoed in “The Truth” and somehow survived. The alien virus is thwarted.

Chris Carter recently said he is unsure as to the fate of the show, but “The X-files” is not going to work without Gillian Anderson. “My Struggle IV” should be its swan song.

Last night, I waited in anticipation for the return of the beloved 90s sci-fi show “The X-files.” The first of six new episodes did not disappoint, and in many ways, it set the show’s central mythology on its head. The show also transitioned well to the present time, which I’ll get to later in this post. Warning: major spoilers ahead.

The show picks up years after series finale, which found Mulder and Scully kicked out of the FBI and on the lamb. Since the final episode of season 9, Scully returned to medicine and Mulder, well,  remained Mulder, convinced that the truth is still out there. A right-wing pundit, conspiracy nut, played by Joel McHale, summons the FBI agents back to action when he introduces them to a young woman who claims she has been abducted multiple times and that her babies have been taken by some unknown force. At first, it seemed like the show went back to the basics: an alien abduction story, just like the pilot episode.

There were several wonderful moments in the episode. Despite the writers’ decision to use the opening credits from the 1990s, the show seamlessly transitioned to 2016. Even more so, the writers showed an awareness of the show’s legacy. Early in the episode, Mulder is watching a YouTube clip of President Obama joking with Jimmy Kimmel about big government conspiracy theories and alien cover-ups. Mulder responds, “My life’s become a punchline.”

The episode also blasts right-wing zealots and conspiracy nuts, even taking a shot at Bill O’Reilly. Joel McHale’s character could be Alex Jones, Glenn Beck or any other right-wing nut who has ranted during the Obama administration about big government taking everyone’s guns and putting us all in white tents.  The irony of this is not lost, considering the Fox empire was essentially built because of the success of two major 90s shows, “The Simpsons” and “The X-files.”

At the heart of the show’s return episode is the idea that the elite in power are the ones we should really fear, not bright lights in the sky. It is also possible that the return episode has flipped the show’s entire mythology. By the end of the episode, Mulder is convinced that the shadowy men/conspirators are ones who need to be feared and fought, that their ultimate aim is full-blown control and subjugation. This idea harkens back to the show’s first two seasons, in which the conspirators were the real villains and the threat of alien existence was never certain. In the later seasons, the aliens took focus and planned a colonization of Earth. The mythos became so ridiculous that there was even a story arc about an alien civil war. Last night’s episode felt a little more grounded in reality.

This possible change/direction for the new season makes sense, considering the show has returned in the age of mass economic inequality and growing global tensions. It’s also possible that the writers realized how bloated the alien mythology had become and they wanted to strip things back to the basics. We have five more episodes to find out!

Here are some basic questions I would also like to see answered.