Last weekend, I joined other members of the Mulberry Poets and Writers Association for a reading at the Bowery Poetry Club, located in New York City’s Lower East Side. Members of our group and a few other poets, including John Amen, editor of Pedestal Magazine, were the featured readers. A short open mic followed. Amen was interesting in the sense that he sang a few verses from his poems in a gruff, bluesy voice. I liked the combo of the reading and the singing.  Some of the other poets had mostly a left-wing, performance, slam style.

Then it came time for our group to take the stage of a poetry venue fairly well-known in the city. I was wondering how we would do, how we would be recieved. One by one, eight of us took the stage. After each of us finished a poem, we drew applause from the crowd, as well as laughter and mmmhmms. They loved David Elliott’s found poem using Donald Rumsfeld’s language. They laughed at Karen Blomain’s poem about being an “old broad.” We certainly held our own with the other featured readers that came from various part of the country to share their work. I even sold a few copies of Front Man afterwards to audience members that came up to me to chat.

In fact, I think we proved that Scranton, PA does have a vibrant art and writing community.  Furthermore, it was great to  be part of an audience so recpetive and attentive to poetry. You don’t aways get that at readings. And the venue also has one of the best hosts I’ve encountered-George Wallace.

If you are in NYC, check out the Bowery Poetry Club. The featured readings run every Sunday from 4-6 pm. 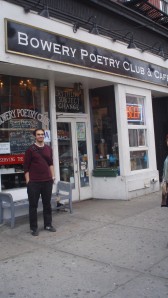