John Krasinski is not the first name that comes to mind in the horror genre. Yet, A Quiet Place, which he directed, is one of the most memorable mainstream horror films of the last few years. The film stars Krasinski as Lee and his real life wife, Emily Blunt, as Evelyn. Together, they exist in a post-apocalyptic world and try to protect their children from monsters that are blind but have a heightened sense of sound.

The film handles suspense masterfully, especially in the first 15 minutes, when the family hunts an abandoned store for medicine. Evelyn needs pills for her sick son, and she slowly has to turn the bottles on the shelf to read the labels. One little sound, and she knows her family will be meat for the monsters. After exiting the store, the family walks barefoot on trails of sand so their footsteps don’t echo and alert the monsters. You hope that all of them will make it home.

The rest of the film is relentless in its use of suspense, sound, and silence. Any wrong move, like the creak of a floorboard or a scream, will doom the family. The monsters, meanwhile, break the silence with their screeches and loud thumps when they invade the family’s home.

Like any good horror film, A Quiet Place serves as a metaphor for a larger issue: parenting and the dread that you can’t protect children from a world that can be unbearably cruel. At one point, Evelyn asks Lee, “Who are we if we can’t protect them?”. Blunt and Krasinski are stellar on screen together, especially in one of the early scenes where they share earbuds, cling to each other, and slow dance. You root for this family and want them to survive, but their pained facial expressions and the threat of a monster that is always lurking in the cornstalks surrounding their farmhouse make you wonder if they’ll last until morning. 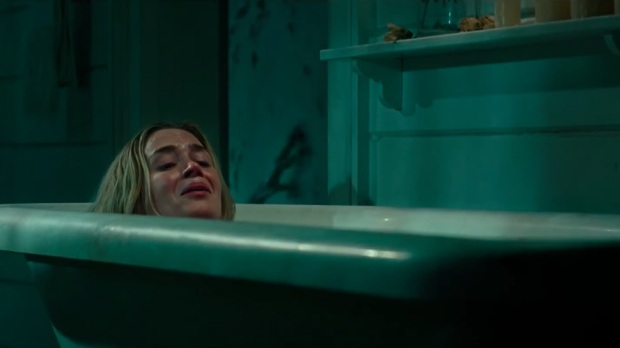 Emily Blunt’s performance as Evelyn is fantastic. She has one of the most terrifying birthing scenes I’ve ever seen on screen. It is visceral and jarring. Her character gradually transitions to a mother who will do whatever needs to be done to protect her children. In a movie that relies so much on silence and has so little dialogue, Blunt pulls off much of her performance through body language and facial expressions.

Krasinski has a mainstream horror hit on his hands. He may be new to the genre, but he certainly understands that character development and suspense that doesn’t rely too heavily on gore are elements that make a good horror film. Blunt, meanwhile, is emotional and powerful. A Quiet Place is the best mainstream horror film of 2018 thus far.