If you’re looking for a contemporary slasher film with a wicked soundtrack, then check out The Ranger, the directorial debut by horror writer/producer Jenn Wexler. On the one hand, the film feels like Friday the 13th meets Suburbia and Repo Man, while on the other hand, the film takes the familiar trope of the final girl and does something interesting with it. Though the film is supposed to be set in the 1980s (I think?), it feels far less nostalgic than the recent wave of 80s throwback TV shows and films. The Ranger is surprisingly refreshing.

The film opens with a gunshot echoing outside of the woods in upstate New York before the camera zooms in on a distressed, younger version of protagonist Chelsea (Jete Laurence)  sitting on a rock next to the film’s  antagonist, The Ranger (Jeremy Holm). Moments later, the police arrive, and the viewer is initially kept in the dark about what transpired. The film then shifts to the present and introduces a teenage Chelsea (Chloë Levine) and her merry band of punk rock friends, four total, who thrash around at shows,  take a pink hallucinogenic drug called Echo, and wear leather jackets adorned with studs and back patches of bands (I’m pretty sure none of the bands etched on their coats are real). The narrative escalates quickly when a show is busted by  police and one of the young punks stabs a cop, causing the friends to flee in a van to the setting shown during the first scene/flashback. Once this transition is made from the city to the countryside, the film’s surreal color palate shifts too, from vibrant pinks to grays and blues. 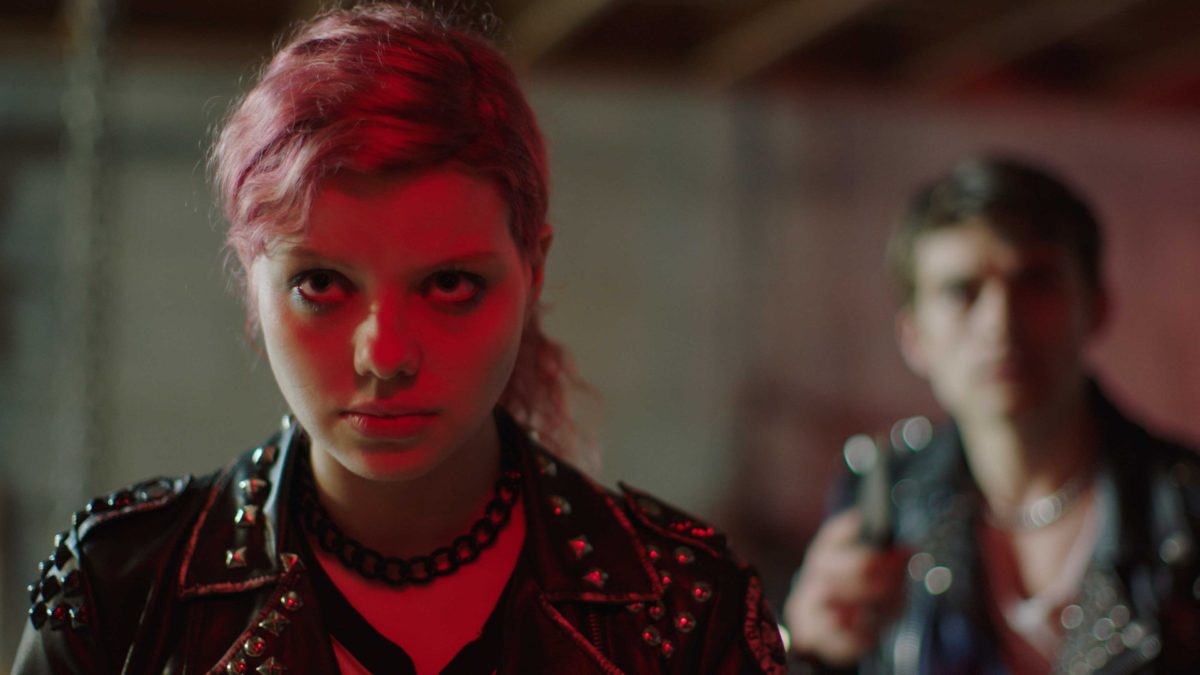 It’s immediately clear that Chelsea feels a closeness to the cabin/wilderness, and the viewer slowly learns more about her story, specifically how she enjoyed time there as a kid with her uncle, a writer who bought the cabin  to be alone and focus on his craft. It’s also evident that Chelsea doesn’t quite fit in with the rebel rousers. They mock her when she points out perennials growing near the cabin, and they totally dismiss her when she asks them not to smoke in the cabin. Additionally, she has a respect for nature that they don’t have, being from the city. One of them, Jerk (Jeremy Pope), tags trees with spray paint, which draws Chelsea’s ire. She’s the only one, it seems, who cares about the trees. Another friend is reprimanded for starting a fire randomly, when Chelsea reminds him that there is a fire pit just feet away. Yet, the young punks don’t want anything to do with authority or rules. They’d rather jump on the cabin’s couches and howl moments after stepping inside. The friends also  dismiss Chelsea’s tragedy when she opens up to them about her uncle and her loss, which is shown through short flashbacks, often out of focus or fuzzy.

Chelsea’s boyfriend, Garth (Granit Lahu), reminds her that the punks are her family, and families are imperfect, but she’d be happier if she accepted them for who they are. And yet, it’s clear that they never fully accept her, thus complicating her place within the circle of leather-clad punks. In an interview with 25YL, Wexler commented that even the punk scene, which preaches individuality, still has its cliques. She says, “Something that’s interesting to me about the punk scene is it’s a place for individuality and it encourages individuality through fashion and raging and throwing your body around and all this stuff, but at the same time there’s still a clique element to it. I don’t know. I’ve always felt like an outsider no matter what clique I’m in, I always feel like an outsider. Even when I’m surrounded by people I still feel like an outsider, so the punk world just seemed like a thematically appropriate place to explore that. And then to position all of that against this figure of authority who’s, ya know, the complete opposite.”

Chelsea is indeed an outsider, the one carrying a trauma that her friends don’t fully grasp and that is shown to the viewer only through murky fragments, which is similar to the way memory operates, especially when processing trauma. Garth preaches that they’re the only family she has, and as imperfect as their life may be, she should accept it. However, the punks, in their own away, have a rigid code of conduct, everything from their dress to their misbehavior.

As Wexler said, The Ranger is juxtaposed with the punks’ disdain for authority and their anarchy in the woods.  He’s an excellent foil.  Before he kills in glorious fashion, using everything from axes to animal traps, he recites park rules. The punks have their own rules and so does he.  The film has just the right level of gore, and the maniacal grin that Holm gives the character, either before or after a kill, adds another layer of fun to the film. The Ranger is indeed a good slasher villain. 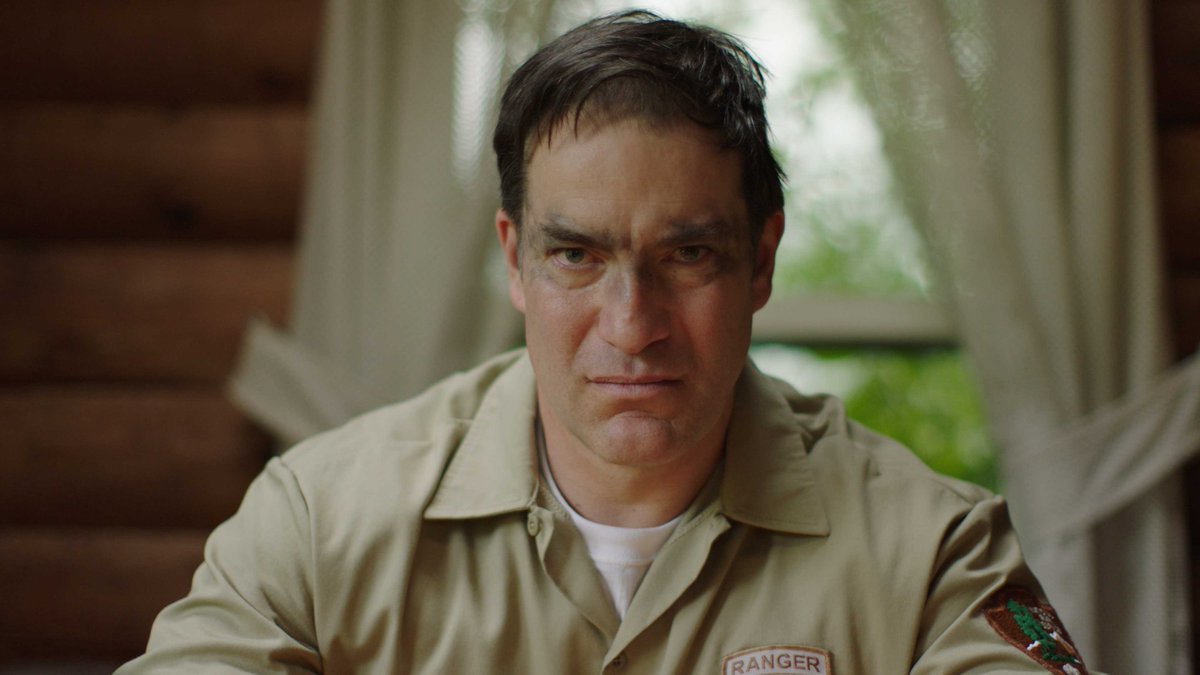 By the film’s last 20 minutes, we learn that Chelsea may not be that different from The Ranger and the viewer learns that she killed her uncle with a shotgun during target practice.  Whether it was accidental or intentional we don’t know. The film begins with dialogue from The Ranger, telling Chelsea that the forest needs more timber wolves, which were driven out long ago by European colonists. Chelsea, The Ranger says, is a wolf, just like himself, a wolf who likes to kill.  She also likes rules. After all, she’s the one who tells her friends not to smoke in the cabin. In the closing minutes, when Chelsea pummels him with a pair of binoculars, he grins and says over and over again to her, “We’re the same.” By this point, Chelsea is blood-soaked and releases a primal howl. Whether or not the two are the same is left up to the viewer.

Like Scream did in the 1990s, The Ranger rewrites the Final Girl trope.  The viewer eventually learns that she too has killed, and like Neve Campbell’s Sydney, she too is carrying around a trauma, but one triggered by her own actions. By the conclusion, it’s unclear whether or not she’ll kill again, but the wolf imagery that ends the film leaves open the possibility.  However, perhaps Chelsea will do her own thing without any type of uniform or hair dye. She wasn’t comfortable with the punk rock code of conduct, and she never admits to The Ranger that she’s just like him. Without The Ranger and without her punk “family,” she’s free to do her own thing.

Wexler’s The Ranger is a fun romp, as rowdy at times as a slam pit. Yet, beneath the power chord soundtrack, the film has some interesting layers to it, namely in the way that it handles fractured memory, trauma, and  slasher film tropes.

The film is currently streaming on Shudder.