Although A Nightmare on Elm Street 2 initially faced mixed reviews and a backlash from some fans, due to  major shifts it made from Wes Craven’s original film, over the years, it’s earned a cult following because of its queerness and metaphor about repressed sexuality. With the release of last month’s documentary Scream, Queen!: My Nightmare on Elm Street, focusing on the film’s troubled production and homophobia in Hollywood, now is a good time to revisit Freddy’s Revenge, aka “the gayest slasher film of all time.”

Released in 1985, the film grossed $30 million at the box office, so it drew in some big bucks. The story picks up about a year after the original film when outsider Jesse Walsh (Mark Patton) moves into a large white house on Elm Street, which turns out to be Nancy Thompson’s (Heather Langencamp) former home, the final girl from the original film. The opening scene is a dream sequence, featuring a quiet, pale, and gaunt-faced Jesse sitting on the back of a school bus, while his classmates chuckle at him.  Soon after his classmates mock him, Jesse encounters Freddy for the first time, when the bus driver morphs into him, and he drives the bus towards hell. Jesse wakes up screaming in a cold sweat. These opening shots of Jesse not only establish him as an outsider, but they can also be read as a metaphor for the AIDs crisis.  During the dream sequences/encounter with Freddy, Jesse is always depicted as pale and sickly. When he wakes up, his body is drenched in sweat.

The second encounter between Jesse and Freddy is much more sexual in nature, though apparently toned down from what it could have been. Unlike the original film, Freddy’s not out to kill the protagonist because his parents burned him alive. Rather, he wants to own Jesse’s body and use him to commit murders. Jesse encounters him after sleepwalking through his house, and apparently, Robert Englund wanted the scene to be even more sexual in nature, telling Patton, at one point, to suck on one of Freddy’s blades. That part of the scene never happened, but the intimacy between Freddy and Jesse, and Jesse trying to suppress “the monster,” drives the rest of the narrative. 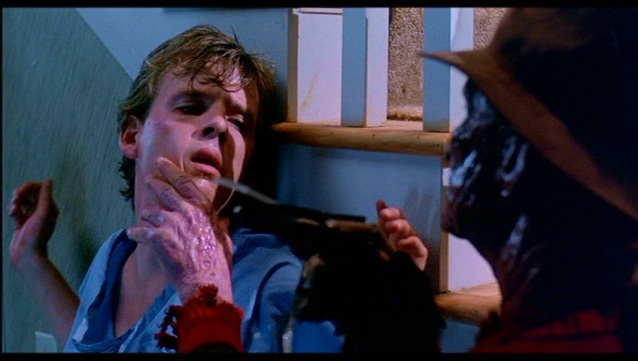 The film’s not-so-subtle subtext adds another layer when Jesse meets the jock Ron Grady (Robert Rusler) at school. Grady spends most scenes with his shirt off, and there’s more sexual tension and connection between he and Jesse than between Jesse and his girlfriend, Lisa (Kim Myers). Add to that the fact that their gym teacher, Coach Schneider (Marshall Bell), gets off on telling Ron and Jesse to “assume the position” when they act up in class, and then orders them to do push-ups. About halfway through the film, Jesse walks through pouring rain and ends up at an S & M club where he encounters the coach wearing a leather daddy outfit. Talk about a bold scene for the mid-1980s! Schneider’s murder is rooted in kink and sex. He’s tied up with jump ropes, stripped in a shower, whipped with towels, and slashed. 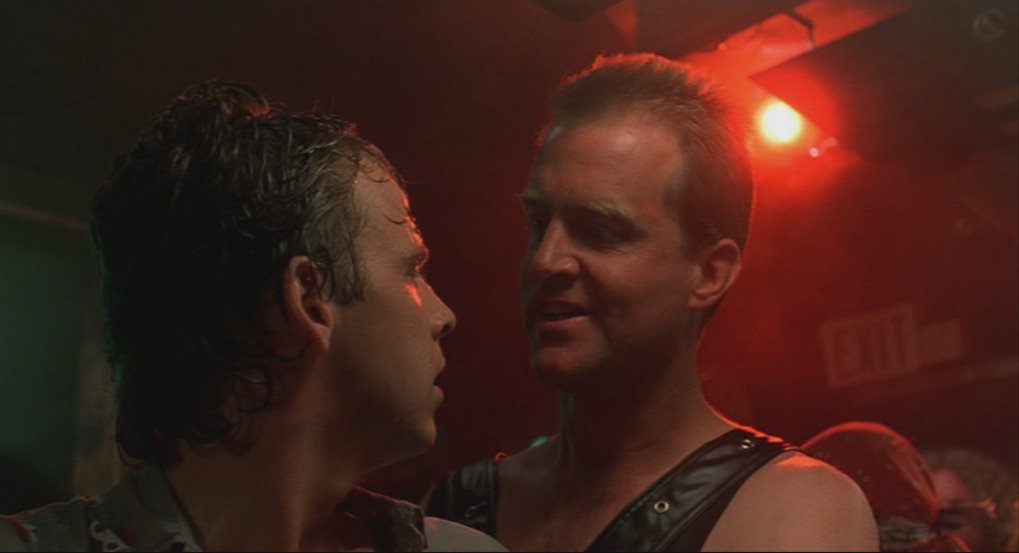 The rest of the film centers around Jesse’s struggle to fight off Freddy, as he screams,  “He’s inside me, and he wants to take me again!” This line is about as subtle as the homoerotic images in Jesse’s bedroom, including a sign on his door that says “No Chicks Allowed” and a board game called Probe. When Freddy is about to take over Jesse’s body at the beginning of the final act, Jesse rejects a heterosexual relationship with Lisa and instead runs to Grady’s house/bedroom and begs him to help him stay awake. What transpires during this scene, namely the moment Freddy slices through Jesse’s chest, is one of the best transformation/effects scenes in modern horror cinema. It’s also one of the strongest metaphors in the film. Commenting on this scene for the three-hour documentary Never Sleep Again, Englund said there are several ways to read this scene. Freddy/the monster can represent the self-hate that Jesse feels, or he can represent homophobia that others inflict upon the gay community, what Englund calls “the taunt.” This scene  is the strongest in the film, layered and nuanced, with killer special effects. 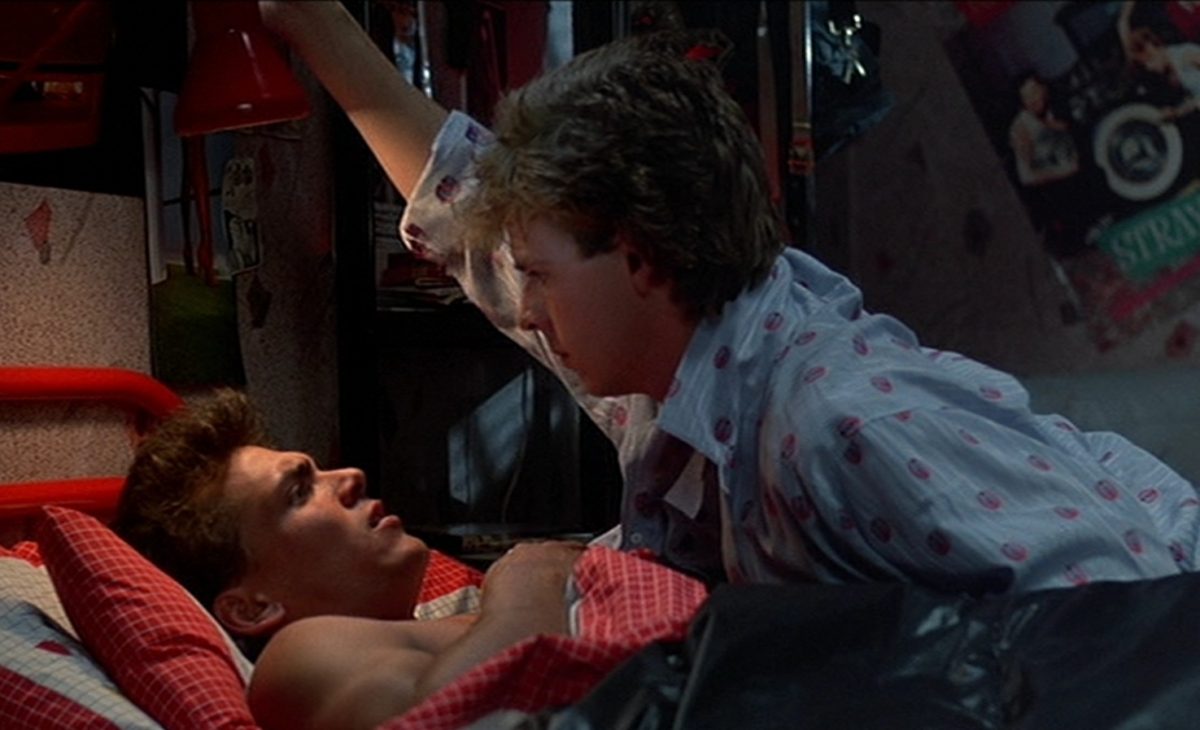 Several other scenes  don’t quite work as well, especially when Freddy enters reality and runs around at a pool party at Lisa’s house. This scene is just silly and ineffective.  In commenting on the film for Never Sleep Again, Craven said that much of the film feels like a series of scenes instead of a cohesive story, a problem, he said, that dogged some of the other sequels. It’s also campy to that point that most of the teenagers are taller than Freddy, so how much of a menace can he really be outside of the dream world?

The film opened to mixed reviews, and even today, it only has a 41 percent score on Rotten Tomatoes. It also nearly ruined Patton’s career, who was typically type-cast in gay roles following Freddy’s Revenge. Additionally, for years, screenwriter David Chaskin insisted he didn’t write the sequel as a gay film, but it was only because of Patton’s acting that it turned out that way. At the time of filming, Patton was still in the closet, and he’s stated in many interviews that the filming process was difficult. Only within the last few years has Chaskin admitted that there was supposed to be a gay subtext to the film. Director Jack Sholder, meanwhile, still insists that wasn’t the intent. Really?

Freddy’s Revenge is not the best sequel in the franchise. That title goes to Dream Warriors or perhaps New Nightmare. Yet, the film deserves major props for what it did in the mid-1980s, for all of the subtle and not-so-subtle gay overtones. Unlike the other sequels, it also did something different and rewrote some of the rules. Instead of a final girl, there was a final boy, and instead off remaining in the dream world, Freddy broke through reality quite frequently, which he wouldn’t do again until Craven returned to the director’s chair for New Nightmare. It took a while, but the film has found its audience.

For an interesting and in-depth read on the film, check out Buzzfeed’s long-form article from 2016 here.