My new book, Waiting for the Dead to Speak, (NYQ Books), is now available! The book will officially be released on Sept. 12, but you can order today. Here is the link.  You have the option of ordering from a number of different places, including Barnes n Noble, Small Press Distribution, and elsewhere. If you want to preorder from Amazon, you can do that too. Here is the link.

Every writer hopes to grow in time and strengthen his/her craft, and I will state that I am eager to share these poems with the world. They are much different than Front Man and All That Remains. I hope that readers like them, and I will be doing  A LOT of readings throughout the fall. More details to come on that when the fall is closer. 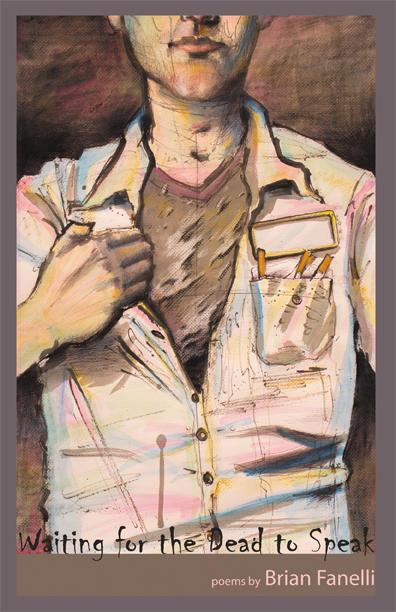 I don’t want to give too much away about my forthcoming book of poems with NYQ Books entitled Waiting for the Dead to Speak, but it will drop in September. I’m doing a lot of readings for it. Stay tuned, and bam, here is the cover art! Thanks to Mikayla Lewis for the cover image!

Lately, I have been working on my third books of poems, tentatively titled Waiting for the Dead to Speak. Right now, it’s nearly 90 pages and split into three sections. I spent several summer mornings and evenings putting the book together and ordering the poems. I recalled a conversation that I had with poet Patricia Smith when I was teaching at Keystone College and some of us had dinner with her prior to the reading. She encouraged an undergraduate student who was putting together her senior project poetry chapbook to let the arc of the book build. She recommended not front loading the book with all of the strongest poems, but save those for last.

I agree with Smith’s advice somewhat. I don’t like books that are front heavy and fall flat at the end. That said, I look at a manuscript like a punk rock set. Pummel the audience with a few two-three minute songs one after the other. Give them a taste of your strongest material. Engage them immediately, prior to slowing down, and after the halfway mark, step heavy on the gas again.  I think a poetry collection should start quite strong. Hit the reader immediately, with the first poem, and let the first few poems set the tone and style for the book, and then it may be okay to slow down some. But by the end of the book, like Smith said, the reader should be left with something memorable.

The same advice could be said about a featured reading. Think carefully about what you’re going to read, and this is just as important as thinking about the order of poems in a collection. Engage the audience immediately. Hook their attention, and then it may be okay to slow down in the middle of the set, or perhaps even read something new. By the conclusion of the set, end with something strong.

These are just some thoughts. Does anyone else have any advice about ordering a manuscript of preparing a reading set?

I wanted to share two new reviews of my poetry collection, All That Remains. The first review was published in the Maine-based journal Off the Cost. Initially, the review was published in print only, but the editors recently uploaded content online. The reviewer, Richard Aston, says of the collection: “All That Remains works as a maturing of Fanelli’s previously published chapbook Front Man. Now he is in a position to branch out to the larger community beyond his personal experience, both in terms of personal story and time line; that which follows from the kind of study and scholarly research that will make him an excellent teacher and writer. The future may bring modifications in form, both of the line and the work itself. Whether the future form he uses is formalist or experimentimental, a doff to poetic traditions of rhyme and meter is in order.”

The other review was published by [PANK] today and written by Tricia Fidler, who had a lot of kind words to say about the book. She writes: “Like a Dylan or Springsteen record deserves more than one spin, Brian Fanelli’s All That Remains is a book that deserves more than one read. Rich in small town culture, this collection is filled with characters that have overcome the losses in life, but it doesn’t forget those who have not. It is down-to-earth and true to those often overlooked groups, the young idealists and the rural working class. Fanelli’s lyrical rhythms whisper and howl, croon and screech, reminding us there will be repercussions for every loss. At the same time, the collection leaves us with the extraordinary hope that it seems only music can bring. For whenever the music stops and all that remains are the ghostly echoes of silence, there will always be the remnants of a song.”

Many thanks to the writers for these reviews, and if you haven’t had a chance to pick up a copy of the book, please do. I’d appreciate the support. Let me know what you think of it!

I’ll continue posting more info about readings and reviews over the next few weeks.

Well, today is the day! My first full-length book of poems, All That Remains, is out through Unbound Content. If you want a copy of the book, you can order it through the publisher by clicking here or through Amazon here.

To celebrate, I’m having a launch party tonight at The Vintage Theater, 326 Spruce Street in Scranton. The event starts at 7, and I’ll have books available. I’m also reading next week, Friday, Nov. 1, at the Seeley Memorial at Lackawanna College. That event starts at 6 p.m., and it is part of Scranton’s First Friday. There will also be student artwork, a student open mic following my reading, and live music.

Only two weeks remain until my poetry collection, All That Remains, is released through Unbound Content. I am getting more anxious with each passing day, but after seeing the proof copy earlier this week, I feel more at ease. There is nothing like holding the book in your hand, flipping through pages of poems you labored over.

The official release/launch party will be held on Friday, Oct. 25 at 7 p.m. at the Vintage Theater in Scranton (326 Spruce Street). The event is free, and I will have books available for sale and to sign.  Following the launch party, I am doing readings in NJ, NYC, the Philly area, and pockets of Pennsylvania. All scheduled readings can be found on my main website.

Meanwhile, I did interviews with some of the local papers around here as well as Boston Literary Magazine, Poets Quarterly, and The Write Life. Those interviews will be posted in a week or two, and I will share the links when they become available. There should also be some reviews posted soon by PANK and At the Inkwell.

About a year and a half ago, my full-length collection of poems, All That Remains, was accepted for publication by Unbound Content. Since then, I’ve had a wonderful time working with the publisher in putting the book together. I’m happy to announce that the book will be out in the coming weeks. We are in the final round of edits now, and I should have the final proof copy very, very soon. I have a release party planned at the Vintage Theater in Scranton for this fall, and I will post more details about that in the next week or two. I also have readings scheduled in the Philly area, NJ, NYC, and parts of PA for late in the year into 2014. Putting this collection together was a long, hard process, as writing always is, but I’m excited and eager to share the final product with everyone soon.

The cover design was done by Jeff Smyers, who designed brilliant covers for other Unbound Content books.

Over the next few weeks, I’ll be posting more updates about the book and various readings, so stay tuned!