Imagine if Superman was a sexually-frustrated, 12-year-old boy who, instead of using his powers for good, uses them to stalk a classmate he has a crush on, slaughter farm animals, and terrorize anyone who gets in his way. That is essentially the plot of the new James Gunn-produced film Brighburn, a gory retelling of the Superman story that is a blend of the comic book and horror genres. It’s nice to see Gunn return to his horror roots, if only as a producer. Director David Yarovesky, meanwhile, kicks off the summer in style with a decent addition to the creepy kid sub-genre of horror.

So much of the story functions as an inversion of the Superman narrative. In the opening scene, we’re introduced to Tori Breyer (Elizabeth Banks) and Kyle Breyer (David Denman), a loving husband and wife who can’t conceive a child on their own. After we witness them about to try again, BOOM!, a red, glowing meteorite crashes on their farm in rural Kansas. Of course, they decide to adopt the boy inside the spacecraft and don’t tell him his true story until about halfway through the film, which only exacerbates their problem and sends him into another fit of rage.

The film’s first 20 minutes or so spend time establishing Brandon Breyer (Jackson A. Dunn) as a likable boy. He has a good relationship with his parents, shown, in part, through photo albums. We see him as a smiling toddler, and, for a moment at least, wonder how he could possibly kill anyone. He excels in school, to the point that he can rattle of random facts in class about the differences between bees and wasps, and he draws the affection and attention of fellow classmate Caityln (Emmie Hunter). The film would have been better served spending a little more time showing the innocent side of Brandon, before he starts butchering poor chickens and murdering people. He becomes a terrifying villain rather early in the movie, shortly after his 12th birthday, triggered by nightmares, weird chants, and visions of his spacecraft that crash-landed on Earth and that his parents keep hidden under a trap door in their barn. 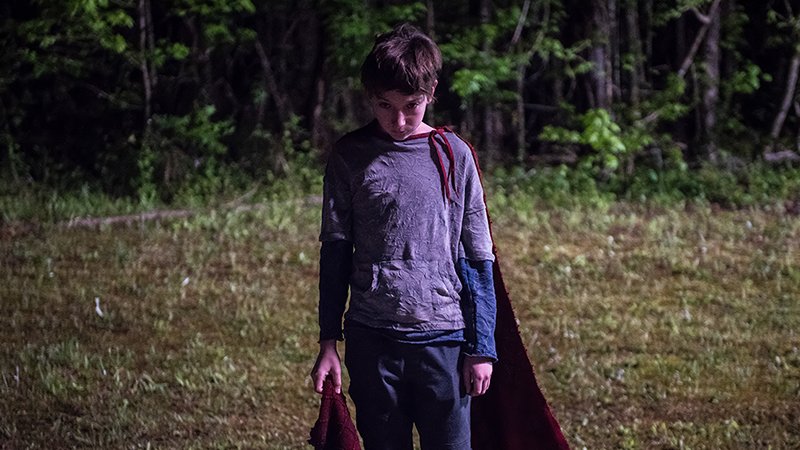 The kills in the film are quite bloody and gruesome and may turn off comic book fans that aren’t used to a regular diet of horror films. One prolonged death scene features a shard of glass falling into the victim’s eye. The way she slowly pulls it out is reminiscent of something you’d see in a Lucio  Fulci or Dario Argento film. In another scene, one poor victim tries to escape in his pick-up truck, until the evil boy wonder raises it in mid air and drops it on the road, leaving the victim’s face split in half, with his jaw hanging loose. Brandon is rather sadistic, if nothing else.

That said, the first few kills in the film are generally characters we’re not that invested in, and many of the characters, other than Brandon and his parents, are fairly one-dimensional, mere fodder to be brutalized on screen. The deaths would have been more effective if the characters had added depth. Additionally, there’s just something uncomfortable about seeing a 12-year-old frequently invade Caitlyn’s bedroom.

The parents, however, are the best part of the film. Both Banks and Deman give solid performances. Having wanted a child for so long, Tori is the last to believe that her baby boy could be capable of evil, even when his powers ram his father against a kitchen wall. Kyle, though, is more suspecting of his son, especially once he starts disappearing late at night and lying about where he’s been. At one point, Kyle even says, “He’s not our son. He’s a thing we found in the woods.” Earlier in the film, there are a few scenes of genuine tenderness between Kyle and Brandon, before he starts killing people, of course. The film’s real strength is found not only in its special effects, but also in the dynamic between Brandon and his parents, especially Tori’s reluctance to blame him for anything because she’s always wanted a child, and she certainly doesn’t want to believe that her sweet, innocent baby boy could possibly crush a girl’s hand at school because she refused to return his affection.

Comic books have always had dark twists and turns, and they’ve certainly dabbled in the horror genre. However, no Marvel or DC movie has offered anything like Brightburn or really hit upon twisted story arcs. After years away from the genre, it’s nice to see Gunn return to horror. Brightburn is one of the more decent genre films this year, but with some heavy horror hitters on the near horizon, including a revamped Child’s Play and It: Chapter 2, as well as soon-to-be released features  by some of the genre’s most talented younger directors, including Ari Aster (Midsomar),  Robert Eggers (The Lighthouse), and  Alexandre Aja (Crawl), it has yet to be seen if Brightburn will be that memorable in the long run. For the time being, though, it’s a fun popcorn film to kick off summer, especially while awaiting some of the bigger horror hits dropping later this summer and heading into fall. It makes you wish that Gunn was still directing films like Slither and Dawn of the Dead (2004).

Oh, and for the true blue horror fans, make sure to stay as the credits start rolling for a really cool scene featuring horror icon Michael Rooker (Henry: Portrait of a Serial Killer, Slither, “The Walking Dead”).