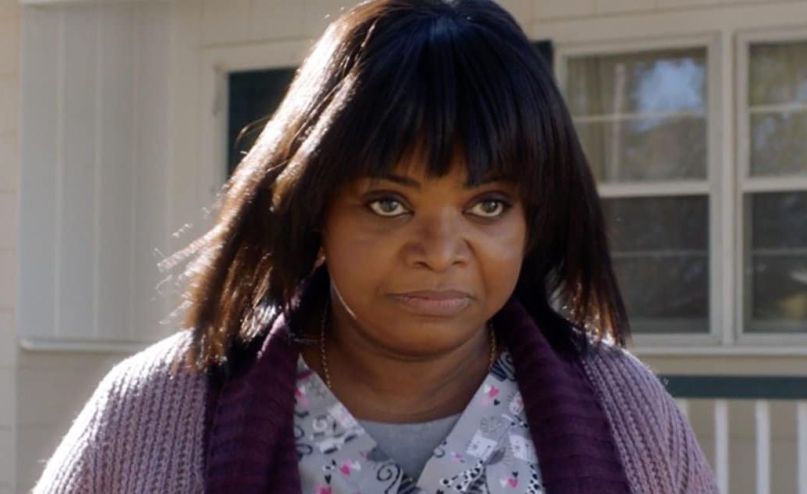 I have no doubt that Ma is going to be a polarizing film. When the trailer dropped a few months ago, Film School Rejects, The Hollywood Reporter, and other entertainment sites pointed out that though the film stars Octavia Spencer, the rest of the production, from the director, to the screenwriter, to the cast, are all white. So the question was posed how can Ma possibly be some type of biting racial commentary when it doesn’t feature people of color, other than its lead? It’s a fair question, especially when you consider that Blumhouse, one of the  biggest production companies in horror, has been criticized for having white men direct all of their movies. (To be fair, Blumhouse has promised to remedy this in the new future).

The trailer, however, doesn’t reveal very much about the film. It does provide the basic premise: Ma, aka Sue Ann (Spencer), befriends a group of teens, buys them booze, and invites them over to party. When they eventually find something off about her, she starts stalking them. The only one of the teens who really stands out is doe-eyed Maggie (Diana Silvers), a new girl in town who relocated after her mother, Erica (Juliette Lewis), divorced her father. It turns out that Erica relocated to her hometown from San Diego and faces humiliation when her former high school classmates catch her slinging cocktails at a casino in a skimpy outfit, but, as she tells Maggie, she has to pay the bills somehow.

The film at least touches upon class. Erica is a single mom doing what she has to do to get by, and Ma, who was bullied as a teen, hence her thirst for revenge,  relates to Erica and generally sympathizes with her, especially since she went from being popular in high school to an outcast when she found herself back in her rural hometown. Both single women have something in common, though this could have been explored more. The trailer also avoided revealing the torment that Ma faced as a teen, which triggers the revenge she enacts in the closing 20 minutes. Whether or not Ma’s backstory suffices is another question.

Perhaps more importantly, Ma confronts the mammy stereotype, which is fitting since the film is directed by Tate Taylor, director of The Help, the wildly successful film that made Spencer a household name but faced blow back because of its white savior trope and the way it depicted black women in subservient roles. Here, Spencer blazes her own trail, and damn, is she good. This is HER film. She does whatever she wants. At her job, she refuses to answer the phones. When Maggie’s friend Haley (McKaley Miller), tells her that she needs a man in her life, she just glares at her and plots revenge for that comment. Ma generally has her own agency, and if there are moments when she falls into the mammy stereotype, it’s simply as a means to achieve her goals. She plays the role at times only to get what she wants.

Ma is by no means a perfect film, but Spencer’s performance alone makes it worth viewing. It’s a film very much aware of the roles women are supposed to fit into, especially black women, and to its credit, it tries to challenge that.  There’s no doubt that the film will be polarizing, but, at the very least, it’s already starting a conversation, and it’s one of the horror genre’s most interesting mainstream offerings this year.

There are two commentaries on the film worth reading, both written by people of color.  The first review was published over at Graveyard Shift Sisters, and it goes into more detail about how Ma confronts and subverts the mammy stereotypes. The second article, written by black horror scholar Robin R. Means Coleman, makes an argument that we’re currently living through a black horror renaissance. Coleman writes, “The horror genre is maturing and becoming more imaginative and inclusive – in who can play hero and antihero, and who gets to be the monster and savior. The emergence of black horror films is just one chapter in a story that includes women taking on more prominent roles in horror films, too.”

That, at the very least, is worth celebrating.